March 18, 2012
When I was clearing out the trailer for my dad, I came across so many gadgets. Ninja Blender. Magic Bullet. Some funky steamer thing. Hand mixers. Just a bunch of different things. I got rid of all of them to Goodwill. No, I didn't want them ... they had not been taken care of and I do not think I would have wanted to spend the money to ship them to me back home. A VitaMix, well, maybe I would have splurged to ship THAT but alas, didn't find one of THAT.

I did however, nab the Food Saver. I've been wanting one for a LONG time but just could NOT justify the cost of buying one. I cleaned it up and THEN found 3 food saver containers. But no hose. So I kept cleaning ... came across 3 boxes of the bags, one was a food saver brand the other 2 are different brands. AND finally, I found the directions ... and the hose! Sweet!

Awhile ago, I saw this on Pinterest one day, how to store salads in your canning jars (which reminds me of the 25 or so blue Ball canning jars that I stored at my inlaws from my parents place) ... and I've been wanting to give it a try since we eat salads 4 out of 7 days for lunch! I'm pretty excited!!

First thing I had to do was order the lid adapter. 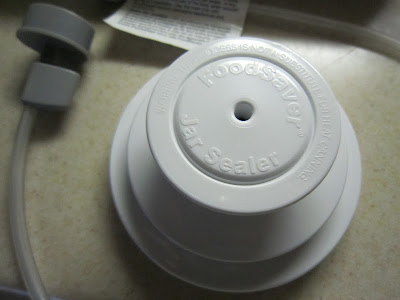 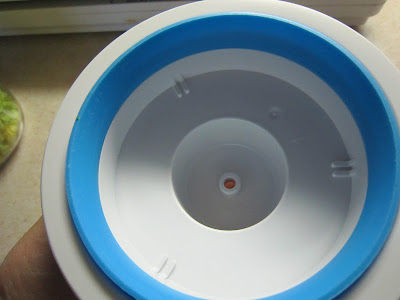 They come in large mouth and regular mouth sizes. I bought both since I have more regular sizes. Grand Total? $18. More than I'd like, but this IS so exciting. (The prices seem to go up and down on these things as they are more expensive than when I purchased them already).

Then I had to evaluate my lids. Since I don't can per se, I just reuse the lids until they get icky, grungy, whatever. I did find that it must have a good rubber seal inside and be perfectly flat (no dings or dents otherwise it won't seal).

And jars. I've got a variety of jars. Not as many BIG large mouth ones as I'd like (I have some that are currently in use in the pantry which is making me want to start using this stuff up to free the jar. 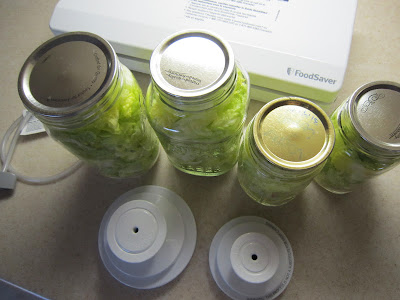 So here we go!

Take your lettuce and rinse it well, leaving the base intact. Shake as much water off as you can and then make your 4 to 5 long cuts (just turn the lettuce over a quarter of away to make a cut from base to end) ... then start slicing. Toss the lettuce in a salad spinner and spin away (I so miss having Sonny Boy at these times, he was the manly man spinner) til fairly dry.

Stuff the lettuce into your jars. Now, the original site says to really pack it in and fill it to the top BUT I found out that if I pack it to the top, the sealer runs for a long time and never seals. You MUST leave a little headroom on the top. 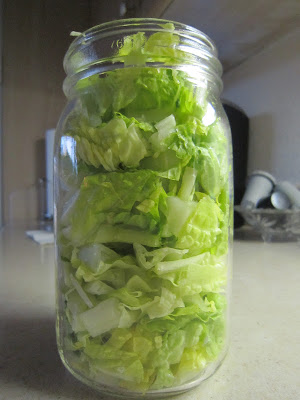 Wipe the top of the jar so its dry and there aren't any stray pieces of lettuce trying to make a getaway. Place lid on top. Place the lid adapter firmly over the top. Insert hose into food saver and lid, pushing down to make sure its in all the way on both sides. 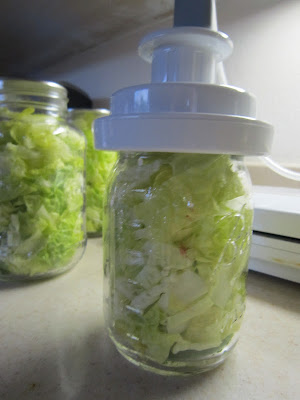 Press your seal button. Stand back a little like I did as I sort of kind of expected a small explosion or something (hey, I admit it, I have anxiety or maybe I'm just a worrier). When it turns off, take off the hose from the adapter (you will hear a little hiss) and then pull adapter lid off. 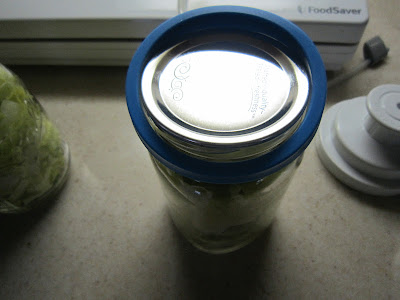 For whatever reason, the small lid leaves the blue gasket behind 95% of the time.
You can put the rings on if you want or not. I do sometimes, and other times I don't. Put the jars in the fridge.

Now, I don't know if it's because I'm a dope and don't can much but I had a heck of a time getting the lids off. The first one I did, I had to toss the lid away because it was dinged. I've found that putting a washcloth over the top while it's standing upright and then taking a butter knife and just gently pry with the side of blade will open it. I know, DANGER! but if you have a better idea, let me know. 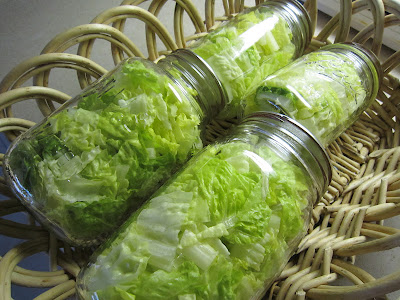 So. How does it work for a weeks worth of salads? Pretty well! At first Hubby was rolling his eyes and asking himself just what the heck possesses me this week. Then after having nice crispy salad for 5 days whenever he wanted, without having to do any work, he was pretty impressed, as I was.

The lettuce IS crispy and still moist, but not overly so. Certainly beats that plastic after taste and smell from pre-bagged stuff. It does appear to last longer and not get the brown edges as would normally happen after a few days of cutting and storing. 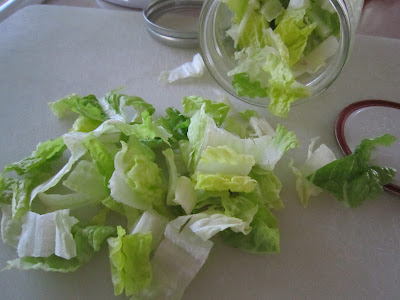 AND I like the jars instead of big bowls in the fridge. I put them in a pretty square wicker basket and set in the garage fridge.

These 4 jars? 2 heads of romaine from Costco. The lettuce is fairly packed in too. I am so looking forward to ZERO WASTE on the lettuce front!
Linking up to:
Frugal Tuesday Tip, Tuesday Kitchen Tips, Works For Me Wednesday, Frugal Friday, Show and Tell; Thrifty Thursdays
food saver salads