It was suppose to be FRIDAY's dinner, but it ended up being Saturday.  And it was odd making it because I was sharing space with Hubby in the kitchen while he made his stuffed shells for Sundays game ... we don't share space too well when it comes to the kitchen.

Regardless, we worked around our issues  ... and actually complemented each other on progress (with the exception of WHY DO I have to go get your parsley??)

And since we were sharing space, it took way longer than it should to complete. I did it piecemeal style and then just sort of heated everything up when we ate at 10pm. Yes. TEN O'CLOCK at night.

But it was worth it. Delicious! So go ahead, share your kitchen space with someone you love and make this!

Ok, the ingredient list is a LITTLE out of order based on the way I wrote it while doing (the Kindle kept losing its wifi connection and the TV was blaring Kid Rock Radio (Pandora, gotta check it out if you don't use it yet), AND a bottle of white wine ... yeah, it was fun. The only way to deal with two of us in the kitchen! 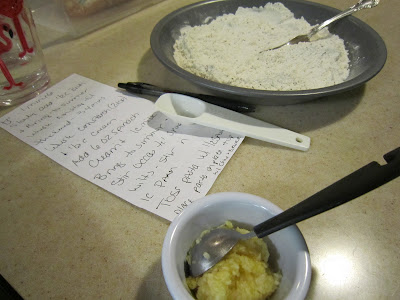 and dredge chicken on both sides, shake off extra and place in pan. Cover with a splatter screen and let them babys brown on one side before turning over. Now, I had to scold Hubby as he was feeling the need to interfere in MY project ... he wanted to move my chicken ... it's like rice, leave it alone, don't touch, no peeking, etc. Once they are turning white on top, they should be sufficiently brown, so give them a flip (gently) and finish browning. Once done, place on a baking sheet lined with foil and stick in the oven at 350 to finish cooking (15 to 20 minutes). 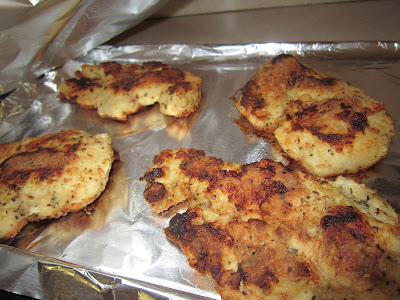 Wipe out the skillet if you have too much oil in it still and reheat pan over medium heat. Add oil (2 tbs) and saute garlic and sweet peppers til softened. Stir in 1 tbs flour (NOTE: I used the season flour from dredging, whether you are comfortable doing THAT is up to you), and use a whisk to stir constantly for a minute. 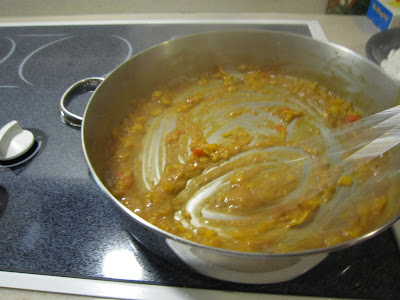 Slowly pour in the chicken broth (I used veggie broth, that's what I had that was opened) and bring to simmer. Continue whisking non stop til thickened, 3 to 4 minutes. (Yell at Kindle as you read the directions, trying to reconnect to wifi and whisk - like patting head and rubbing tummy, can't do it).

Whisk cornstarch in with half and half, pour in to pan, along with milk and spinach. Give a quick stir and bring to a simmer. 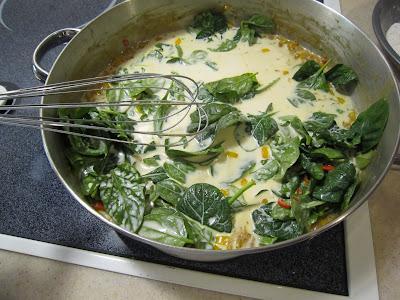 Stir occasionally til spinach is wilted (stand back and say, ohhh that looks good). 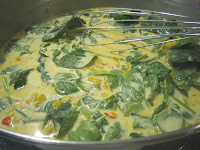 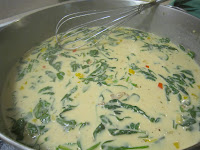 I'm looking forward to buying spinach from the "bin" at the Fresh Market ...
no more suprises to be had in the middle of the container! 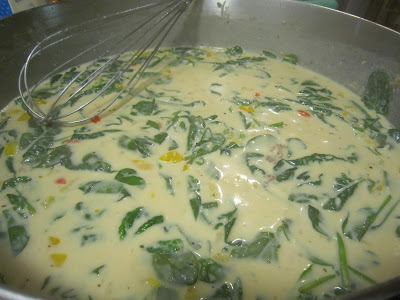 Just about there...where's the cheese?


Once the spinach is wilted, add the parmesan cheese, stir and let melt.

Ok, here's where I 'cheated' ... I had pasta already made that was stashed in the freezer (learned this from Jackie Brown) ... and saved alot of hassle on this day of all days! BUT, if you haven't tried freezing your leftover noodles, then you need to be boiling water and cooking up the noodles while you make your sauce (boil your water while doing the chicken and cook the pasta while doing the sauce) ...

Take half the sauce, add to the cooked, drained noodles and stir to coat. Serve up the pasta on a plate and top with a piece of chicken and top the chicken with a little of the reserved sauce. 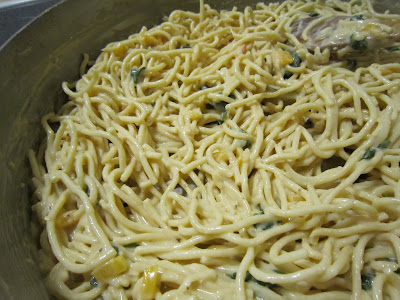 To make it easier, I put the sauce in a dish for topping and dumped the
pasta in the skillet with rest of sauce 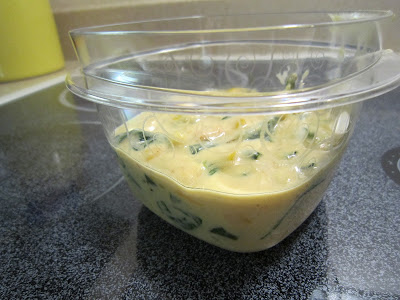 waiting on the chicken


I served all of it with a side of salad and Hubby's favorite Olive-Y Garden dressing I had made earlier in the day ... 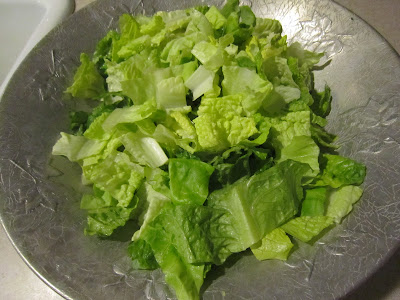 Just plain romaine (wait, I don't think I told you how much I love Costco's lettuce! 6 heads for about $4 ... and it's GOOD, not all wilty and brown) 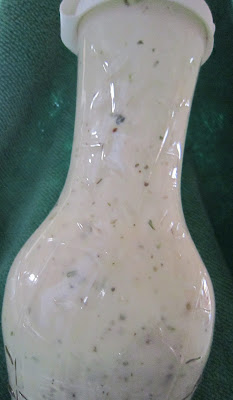 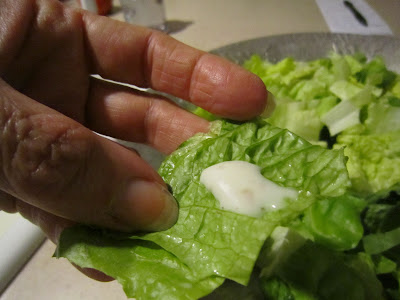 My hands were really bothering me today ... I can see how swollen they are here


Princess was so glad she got home from work at 9:30, she walked into the kitchen sniffing the air (this after working in a restaurant for 9 hours already) saying something smelled good (I suppose anything better than tex-mex style would be good to her!) ... and she graced us with her company at dinner ... so maybe it was a good thing we ate late that evening. (She also asked when we started listening to Lady Gaga and such?) 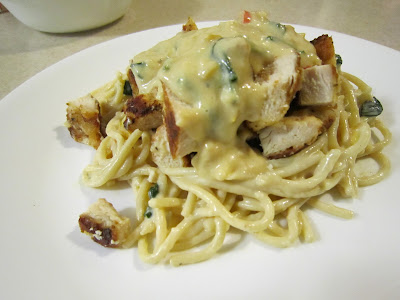 I cut our chicken up and THEN put it on the pasta, easier to eat

Check out some of these cool sites that I've starting linking up with:
Mouthwatering Mondays, Your Recipe, My Kitchen, Mangia Mondays, Creative Mondays , Tempt My Tummy, Made From Scratch Tuesdays, Tuesday Tasty Tidbits, Tuesdays at the Table, What's Cooking Wednesday, Made Famous By, Whats Cooking Thursday, Food On Friday, Anything Goes, Dwell On Fridays, GCC Recipe Swap, What's Cookin in the Kitchen, Weekend Wander, Not Baaad Sundays,
chicken copycat recipes